Hearing the name skee ball takes me back to a time where going to arcades and carnivals was the norm. You would ask the person you liked to accompany you and tried to impress them with your skee ball skills.

What actually happened was that person would be a much better player, and they end up winning a prize for you instead.

I miss that overall atmosphere where kids would be running around; you could hear coins inserted into slots, giant stuffed animals, and deep-fried food. Out of all the games present, you start with what you know, usually skee ball.

I can bet you feel that ball in your hand, ready to roll up the ramp and hoping that it goes inside a high-scoring circle.

If you have been overwhelmed with nostalgia like me and do not have an arcade nearby that would host a skee ball machine, I will present the next best option. Below is a list of the best skee ball machines that you can keep at your home. 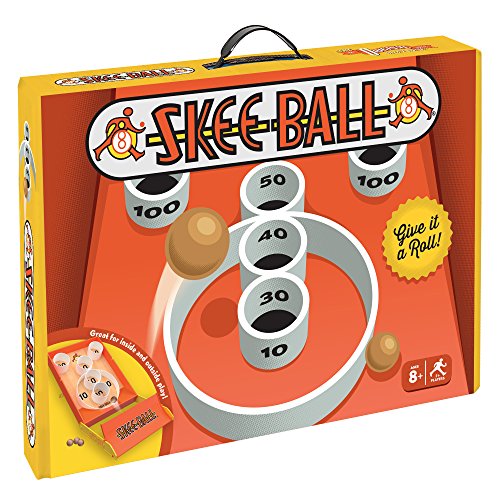 This version of the game is the closest you can get to the real experience. The whole board is foldable, so it is easy to store. You have five levels of scores: starting with the easiest and largest ring, it awards you ten points, moving in the center and upwards of the same circle awards you 30 and 40 points, outside of the 10 point circle at the top is the 50 point one, and at the corners are the 100 points one, which are also the hardest to reach.

You will receive five wooden balls and a score sheet. There is a ramp already present on the board, which will give the balls traction to move upwards. With 12 frames in total and three balls per frame, the team with the highest score wins.

Since the size of this game is adequate, it can be played by all ages. Bonus points if you use a cardboard box and fashion a longer ramp for the ball to travel on. 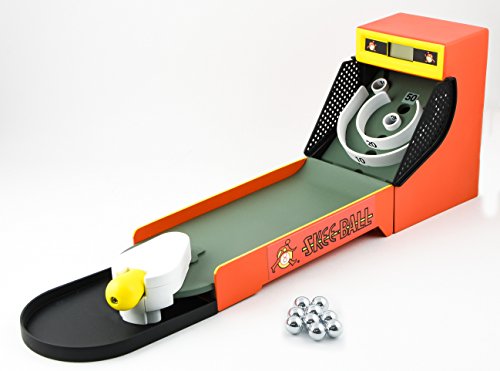 If you wanted to experience the electronic version again, this mini-game would be perfect for you. However, mini being the operative word here, this game’s size will probably be the length of your arm. To be specific, it is 15 inches long, with a height of 5 inches.

The game has two modes: you can try to score as much as possible in 30 seconds or beat your high score with only nine balls available for the round. The game will automatically record your score as a ball enters a hole.

You will have nine tiny metal balls, which you will need to keep track of since they can easily be lost. Four score levels are ranging from easiest to most challenging: from 10 to 100. You also have a pointer to aim your shots that will travel up the ramp present. This machine is exactly like the one you will find in an arcade, except much smaller. 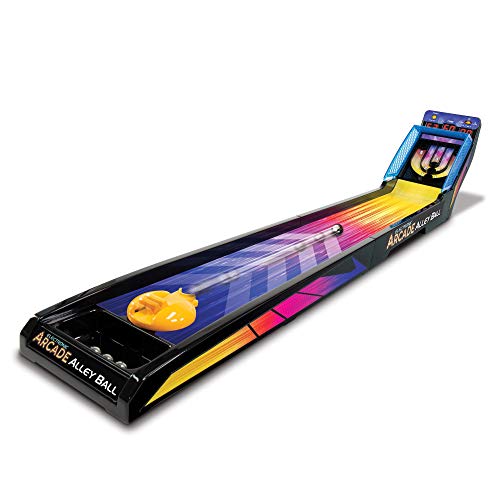 You have another electronic version that may not be as large as an actual machine but is relatively bigger than the game mentioned above. The length of this will probably take up a whole table since it is 3 feet long and would require a stable base to play it on. The game itself features a colorful ramp on which your balls will travel.

An electric counter will record your scores of 1,2,3 or 5, and a timer to count down rounds. The contraption from which you shoot your balls is a pulley system from which you can control the balls’ speed and direction. The machine will require AAA batteries to work, 3 of which are in the package. 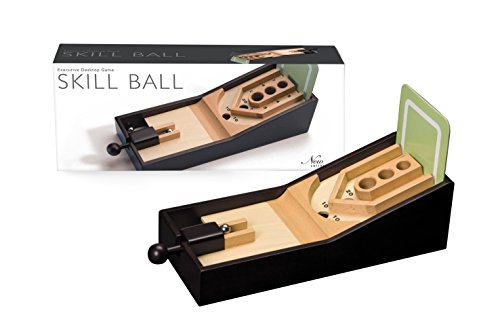 Now we are back to the smaller versions of the game, which are to be played manually. A great advantage of this size is that you can keep it at your desk at work and play whenever you need to relieve some stress.

The game is designed with hardwood, with a final dark finish polish. There is a headboard at the end of the holes to prevent the ball from going out of the game. You will have two steel balls, which can score between 10 to 50 points.

Once a ball enters a hole, it will automatically be brought back to the start. You will also have a ball launcher to control where you want to shoot the ball. 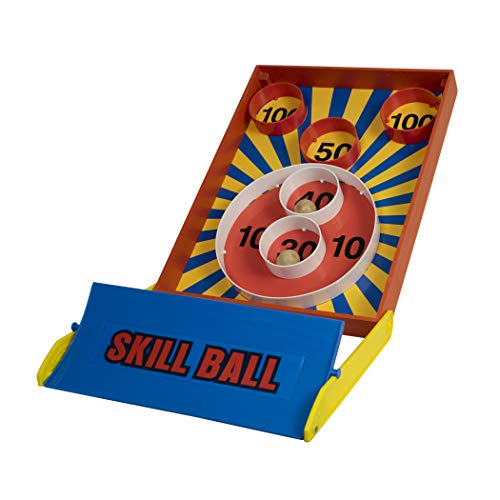 This version is a colorful variant of the first skee ball game mentioned in this article. It is a foldable board that contains five levels, from scoring 10 points to 100.

It has a fun color scheme consisting of red, blue, yellow, and white, all of which brighten up the board and give it a more carnival feel. The ramp is also attached to the board for rolling the balls.

Along with the board, you will have five wooden balls, the size of a walnut, and a score sheet. This game is great to play with the family and can include people of all ages. 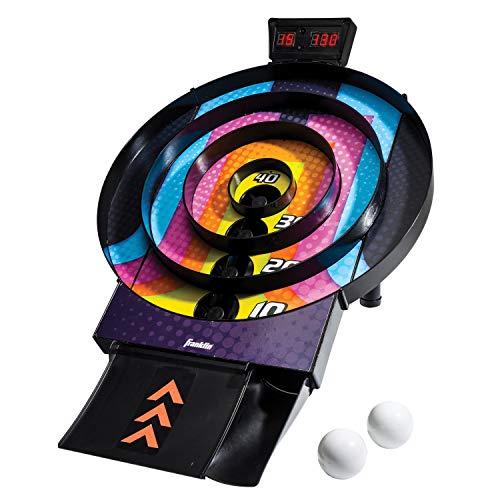 With this product, not only will you visually experience being present at an arcade, but this machine emulates similar sounds as well.

The game is electronic, as it will record your score and show the time left for a particular round. It has four levels of circles where ten is the easiest, and 40 is the most formidable scoring zone.

You will have to set up the game by attaching the ramp and making the board stand on its legs. These legs can easily be folded for storage. You will also receive two arcade balls with the game that will automatically return after passing through a hole. 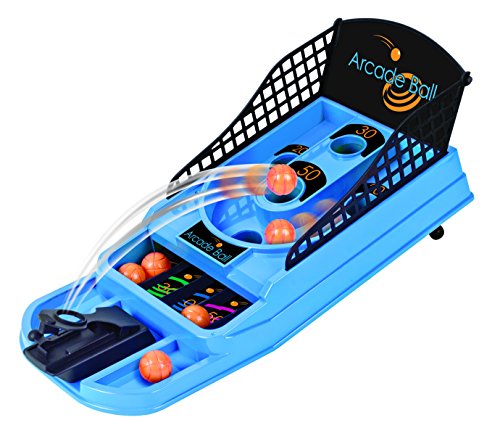 This mini-game is a mixture of arcade basketball and skee ball. Its size is small enough to place on your desk and enjoy while working. The coloring is similar to a basketball court, with the court being black and blue and the balls being orange. There is also a headboard so balls can rebound and enter a hole.

There is a rotating ball launcher present that can be compared to a catapult. You can swivel it around to aim and then pull it back to launch the ball into your desired hole. When the ball returns, your score will be automatically recorded according to the hole it went through. 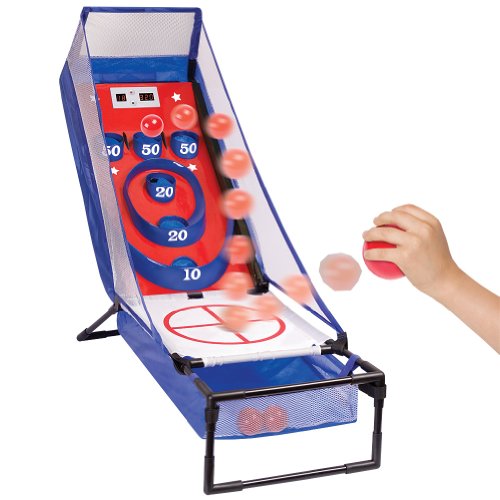 We had been discussing desktop-sized products before, but this one can be constructed and kept on the floor. Building it will take some mind wrangling as the instructions are unclear, and you would be better off if you followed the picture on the box.

Once assembled, with the four levels ranging between 10 to 50 in place and the buzzer plus timer functional, you can enjoy the game. Where an arcade game would require coins, you can operate this machine with batteries.

You will have three red balls that you can bounce on a target, and they will bounce back into a corresponding hole. It is a little different from the traditional rolling, but it will be fun to play nonetheless. 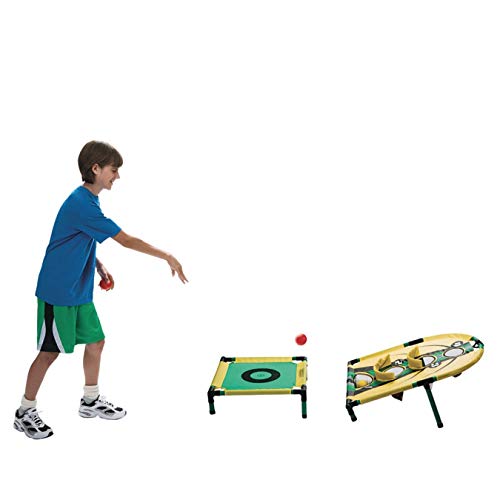 Like the previous bouncing version of the game, this is similar to a larger scale. You will have a separate trampoline from which you will bounce the ball, and you will keep the targets at a distance. You have four levels in the target, from 1 to 4, and your objective is to reach four the maximum number of times.

Despite the bouncing, this version replicates the original in the sense that the ball’s control and speed are in your hands. You will have to position the springy fabric pad in a way that, when you aim, you reach your target each time. You will also have to practice keeping your throws straight as the balls can also completely miss the mark. 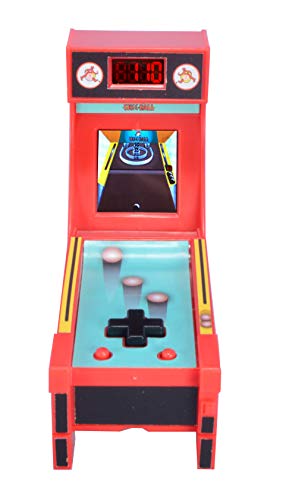 This final machine was added to this list as a bonus feature. It is a video game version of skee ball that is the size of your palm. You will have an LCD screen where you will observe the ball rolling toward the targets. There are arcade sounds in the game, different levels, and bonus games inside the machine.

You will be able to control the ball through arrow keys, and there are two additional buttons to control ball velocity and position. Your objective will be to score as high as possible by reaching the targets, and a counter will display your score at the head of the machine.

Before you go off to buy one of these machines, I would first like to remind you that these are far from the huge machines you have experienced in the past.

These are much smaller versions that can be kept inside your home or workplace that try to replicate the same experience. Most of these will not be run on electricity; instead, you will manually have to tally scores and retrieve the balls.

Some smaller versions of the game also have a ball launcher instead of throwing the ball by hand. While this takes away from some of the original experience, it provides more precision, control over the speed, and better aim.

Again, to reiterate, short of buying an actual skee ball machine, these are the next best thing to capture that nostalgia. It would help if you also kept the following factors in mind before you make a purchase:

Noise Level – If you are purchasing this game for your office, you need to be aware that all of these games will create ample noise. May it be through buzzer sounds, arcade noises, or just the clacking of the ball against the ramp, people around you might get disturbed with all the racket. These would be ideal for home settings or to be placed in an office game room.

Type – You have three choices available in the product ranges. You can buy a desktop-sized game which will be portable and played through a ball launcher. The foldable board with the ramp attached is slightly bigger and provides a more authentic feel. Finally, the bounce version is greatest in size and is a different take on the traditional game.

Whichever you purchase depends on who will play the game and how they will be satisfied.

If You Lose a Few Pieces Can You Get Replacement Parts?

Most sellers sell the game as a whole, and since most of them are in the price range of $20, it does not make sense to sell parts separately. In case you lose an item such as a ball, you can try to find a matching ball of similar size and type from any toy store and make do with that.

If any piece gets damaged and the machine’s structure is affected, you can try hacks such as superglue, duct tape, and building makeshift legs from cardboard to maintain stability.

Are There Any Safety Considerations for These Machines?

Most of these machines are small in size, hence should be kept in safe places such as desks or shelves. In case you were playing this by placing it on the floor, make sure you put them back on higher ground as there are chances you might step on the game. Stepping on it will not only fatally damage the machine but might also lead to some injury.

Secondly, the balls in the game can be a choking hazard for any pets or children around. Kids can also hurt themselves by breaking off a part of the machine, such as the ball launcher. Hence, it would be advisable to keep small kids away from these machines.