It is one thing to imagine your own fantasy land, but completely different to jump into an already present one. While watching a TV serial, or playing a video game, there is this urge to physically be a part of it. You become so engrossed at times, that you forget there is a real-world outside the show or game.

With Mega Bloks Sets, you can bring that made-up land in your game into reality. Rather than watching them on screen, you can play with them in real life. Whether you want to be an assassin on the streets of Rome, or just want to hunt down zombies after the apocalypse, these sets will cater to all your needs.

Read on to know our top picks for best Mega Bloks sets. 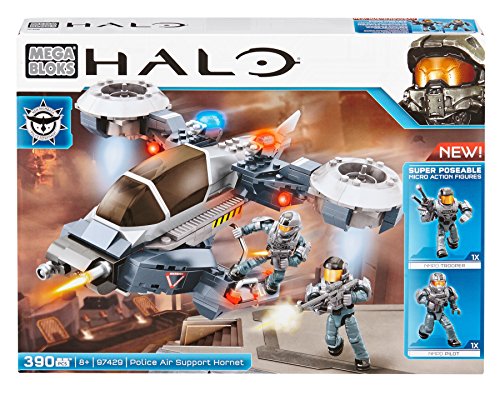 I personally have not played Halo, but for all the fans out there, this is a chance to enroll in the New Mombasa Police Department. One thing that I have always wanted to do, is turn on that police siren while chasing a runaway car. In this set, with 390 pieces, and two action figures, you are fully equipped to battle some criminals.

You will be able to construct a hornet, which is a police spaceship that shoots bullets. Car chases will be next level when you are inside this twin turbine engined ship.

Your two players are a pilot, obviously to fly the hornet, and a trooper for chasing down enemies. They have customizable armor, along with a sniper rifle and a pistol. Be ready to protect the people in the city. 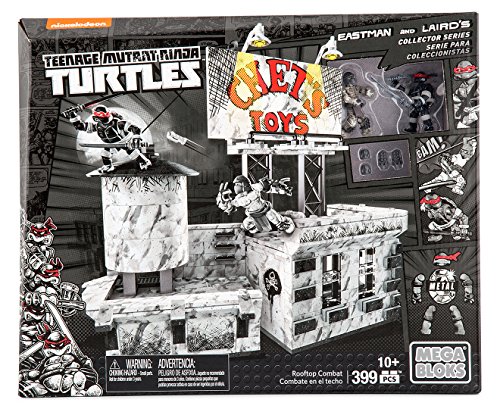 If Leonardo, Donatello, Raphael, and Michelangelo were not an integral part of your childhood, can you really say you enjoyed being a child? All I know is, I tried lifting up so many sewer covers to try to find the turtles and have some pizza with them. I just wanted to fight the monsters with them, but it was not meant to be.

If you had similar aspirations, look no further than this set. You will have Leonardo with his customized weapons, ready to take on Shredder. You will also have to build the location this battle will take place in. The setting is a building with a large billboard and a water tank.

If you want to swap out the bandanas and weapons, you can make the other ninja turtles. And yes, you noticed correctly, they all are named after famous renaissance painters. 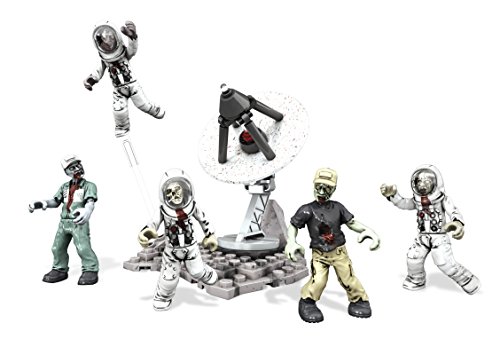 My kid has played so much Call of Duty Zombies, that he has started to resemble the undead himself. Now, these Zombies are actually on the moon and it is your mission to eradicate them. Since food is sparse on the moon, they should already be weakened and easier to kill.

The mob includes five zombies, which are either astronauts or technicians. You can see the minute attention to detail in the cracked helmets and holes inside the zombie’s bodies, meant to be filled with sharp pointy weapons.

You will also be able to build the environment on the moon which includes a lunar satellite dish. Remember, five zombies might seem like easy prey, but you have not mastered the diminished gravity as they have. 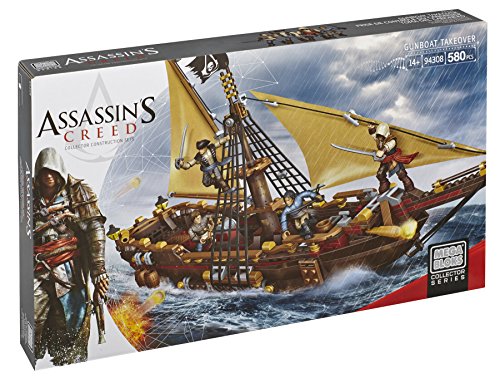 You will love this set if you have played Assassin’s Creed Black Flag. You will even love it if you have played any other part of the franchise. Along with having Edward as your captain, and three allied action figures, you will be able to build the ship you will set sail on. Your allies will be equipped with weapons and the ship will have an actual canvas sail with cables.

I hope you are ready to delve into history and have cannon wars with rival ships. Become the pirate you were destined to be. Just grab your harpoon and hunt down sea creatures with Edward. Edward had named his ship Jackdaw. You can stay true to that, or overthrow Edward as the captain and name the ship Fluffy Rabbits. 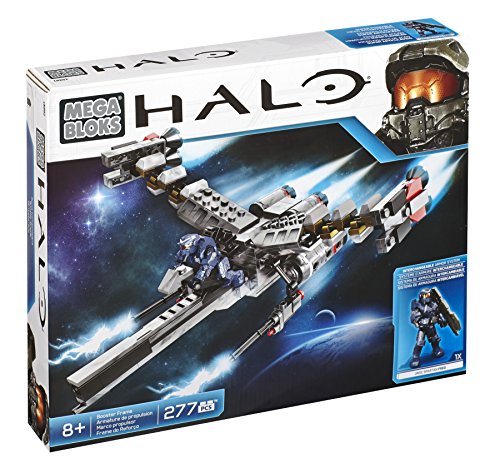 We are back into the world of Halo with another buildable spaceship. This one is much sleeker, and you can maneuver it across the galaxy. You will have one Spartan residing the ship, who has a laser gun and armor that can be swapped.

While previous battles occurred on the ground or on water, with this, you can have a space battle. Your ship is equipped with rotary cannons to break through any enemy defense system.

The purpose of mentioning different sets from the same franchise is so you know that you have the option of collecting multiple models and create your own universe.

These will allow you to have a multitude of action figures, weapons, and a few spacecrafts. You can enact a whole movie with such a vast set. 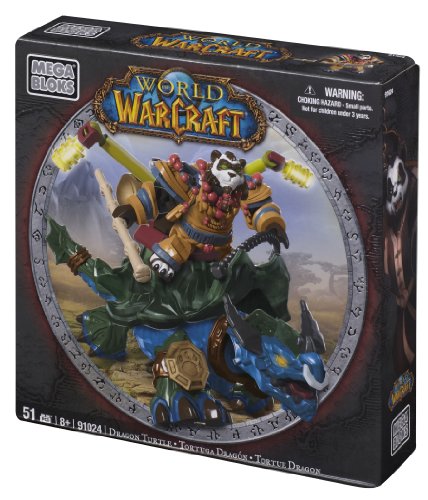 World of Warcraft is the ultimate fantasy land to escape into. You will have the main character, the mighty Panderan monk, decked out in full gear with his staff to vanquish all enemies. To me, he looks like a cuddly bear, but I am sure his powers are unmatched.

The best part is that you will get to have a dragon. You can take off into the skies and burn enemies with dragon fire. While building, you can add in a seat on your dragon.

This will resemble a horse saddle, but for a dragon. And you, as a bear, will ride it. You are now ready to set off on your noble mission to find your next nemesis. 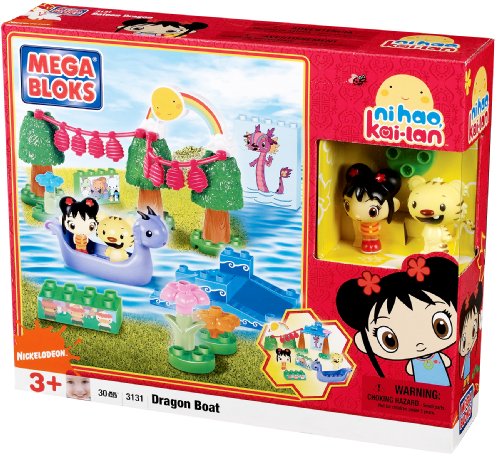 If I could have any mythological creature as a pet, it would most definitely be a dragon. Not the kind of cute dragon in this set, but a powerful and vicious beast. This set mainly targets children who are fans of Ni Hao and the Kai-lan world. With 31 pieces, this set will take you to a Nickelodeon created world.

Kai-Lan and her tiger friend, Rintoo will be your action figures that will sail in the dragon boat. Did I mention the boat is purple? Along the way, you will get to meet your other animal friends on this sunny adventure.

You are free to come up with different scenarios where you might have to rescue a fellow squirrel or help Mr. Cat reach their destination.

Mega Bloks Call of Duty Mob Of The Dead 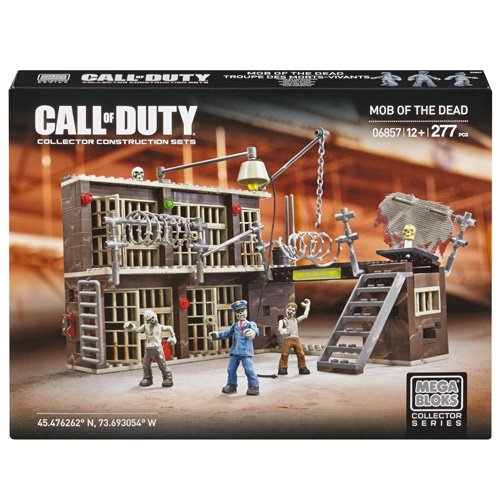 Call of Duty is a very popular franchise. I guess shooting zombies must fulfill some inner desire. This set will not only let you kill the undead but also imprison them.

You will have a two-story Alcatraz prison, with stairs connecting the floors. The small details in this set, such as barbed wires, chains, and decoration skulls really sell the idea of a post-apocalypse jail.

You will have zombies as action figures. A guard zombie, and two inmate zombies that all want to eat your brains. The surroundings are not violent or gory, which makes it suitable for children. Though, you can add ketchup which will act as a pool of blood, and then a condiment to dip your fries in

If you just want some simple monster trucks that glide through the jungle, look no further than this set. You can build three ramps that these machines will blaze through. You can create a realistic jungle setting with palm trees and a waterfall. Then, all you need is your machines and a creative game to play with the trucks.

You can make it a race of sorts. You have two characters, Blaze and Stripes, who are the monster machines. Make two ramps of the same length, and see which machine can make it through the waterfall the quickest. The loser then gets to treat everyone to ice cream. 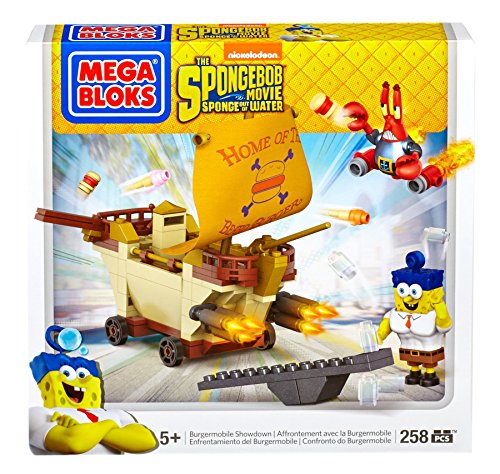 Who lives in a pineapple under the sea? SpongeBob Squarepants. I just wanted you to sing that as well. Sadly, in this set, there is no pineapple home. You have a boat, which transforms into a food truck.

This is important for the storyline as there is a huge food fight coming up. The Burgermobile has a launcher that will shoot out ice cream and obliterate all other participants. You will reign as food fight king/queen.

Also included in the set is, obviously, SpongeBob. The square pants are there too, but this SpongeBob is ripped. I see he has been hitting the underwater gym. You will also have a Mr. Krabs figurine who will be your superhero that guards that Krabby Patty recipe.

Have I mentioned how much I love a play on words and letters? Just omitting c from the world block makes it look sturdier. If that makes sense.

Anyway, now that you have gone through our top choices, there are some additional factors you should keep in mind before you purchase one of these sets.

Material – Most of the parts given in a set are made of plastic. Since these are being produced for children, it is a safe and approved plastic. That means that it does not contain any harmful toxins or substances. All of the parts given will not feel cheap and be coloured according to the theme they are representing.

Ages – Mega Bloks claims that children above the age of 1 can use these sets. However, I would caution that since there are small pieces that could potentially be a choking hazard, only give kids under 5 finished and secured figurines.

Children over 5 can easily build these figures and the surrounding environment.

Besides children, anyone who is a fan of series such as Call of Duty, Assassin’s Creed and Halo can collect these figures and display them for others to be jealous.

Additional parts – Any parts required to complete the set will be included inside the package. If you want to enhance the setting by adding in personal touches, you are welcome to. A dinosaur could run in the jungle behind the monster machines, as an example. However, if you lose a part, you cannot separately order another individual piece. They only come as complete sets.

Are Mega Bloks better than Legos?

That really depends on what you consider the definition of better to be. As compared to Lego, Mega Bloks provide more value for money. But, a higher price point of Lego means that they are providing better quality sets.

Can pieces of Mega Bloks and Lego be used together?

While all pieces might not fit together, there are a few pieces that are compatible with one another. Some might loosely hang on each other, which could work if you are not very particular about a perfectly built figure.

How to clean and disinfect the Mega Blok sets?

It is natural that while playing, some pieces and get thrown around. Or even lying on a shelf, dust can gather on top of them. First, wipe them off with a clean cloth. Then, run a slightly dampened cloth over them to catch any residual dirt.

It is not advised to throw them in a washing machine or a dishwasher, as the pressure inside the machines might disfigure some sets.

Are Mega Bloks safe to play with?

They have been tested and approved in both the United States and Canada. They do not contain BPA or PVC which are not only harmful for your child, but also the environment.

What are the different kinds of toys that Mega Bloks produces?

There are a wide range of sets that are available. You can construct vehicles such as trains and cars. There are educational ABC sets. You can get castles or jungles. They also partner with brands like Sesame Street, Thomas & Friends, and CAT to make toys using their characters.