Let us get real here, you are not just searching for Meccano building sets for your child; you are equally excited for the opportunity to relive your childhood through them.

This might be, as it is the case for me, due to an unfulfilled desire of having a model set as your friends did, but your parents could not provide you with one at that time.

Or, you played with these so often in childhood, you want to recapture those moments of nostalgia. Those moments may include accidentally stepping on a piece in the dark and feeling like you had been shot in the foot, but it was all worth it.

Whatever your reasons are, Meccano sets are a hands-on and enjoyable way to spend some quality time with the little munchkins. You can transport yourself to an alternate reality where you are just about to launch into space.

Or you can be a construction worker, operating machinery to build the world’s tallest structure. Meccano sets are so diversified nowadays that no matter your preferences, you’re sure to find one to match them.

Read on to find our recommednations for the best Meccano sets you can purchase. 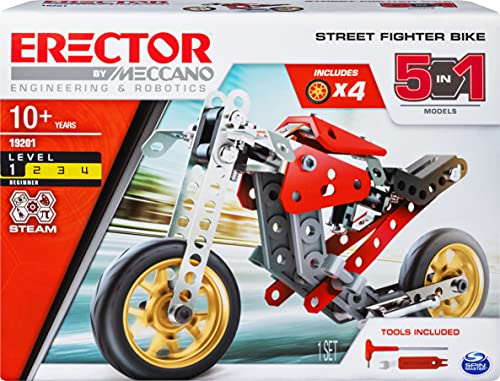 No, this does not mean that if you have this bike, you can go out into the streets and pick a fight. All that will do is result in several injuries and get your bike stolen. The name street fighter actually depicts a particular style of the bike. Plus, with 132 pieces, you are not just limited to building bikes. You can even make up to 5 distinct models of cars, as well as bikes.

S.T.E.A.M here is not the gaming platform, or evaporated water, instead, it stands for “Science, Technology, Engineering, Arts, and Math.” While you fool your kids into thinking these are purely for entertainment, they will also be learning about decision making, and improving motor skills. 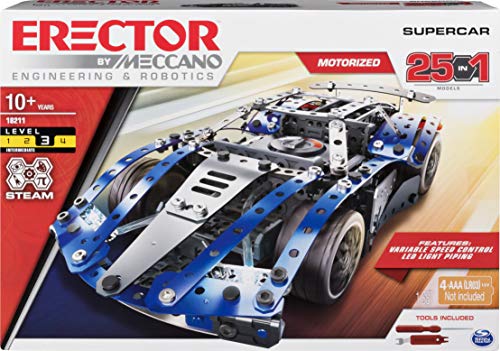 Here lie your dreams of becoming a professional race car driver. You can just picture the thrill of drifting across a bend, leaving behind other racers to inhale your smoke. These might also be of the same S.T.E.A.M category, but you cannot beat a sleekly designed supercar. You can create 25 new car models with the 328 pieces given.

The LED lights you fit into this car are real, and so is the motor that is included. The tyres are also ruggedly made in case you want to go on an off-road race. This set is a little advanced for beginners, so do not feel shy asking your own parents for help when you and your children get stuck. 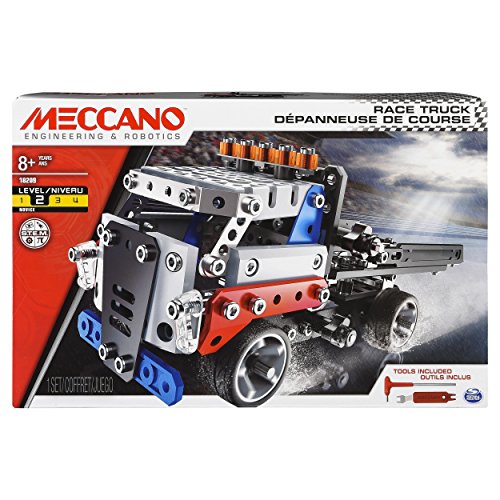 More racing, yay. I cannot comment on the stability of a truck if you are using it for racing, do that at your own risk. Maybe it is just me, but this truck really resembles Optimus Prime. So, good luck fighting against evil robots. I mean, it even comes with a flatbed for carrying all your essential belongings.

This set has a total of 285 parts and is also an educational model. Educational in the sense that it is teaching practical skills, as this is like a 3D puzzle. You need to determine where each bolt goes, otherwise that flatbed might fall off in the middle of a race. I guess that might also be of strategic benefit if it hits another racer. 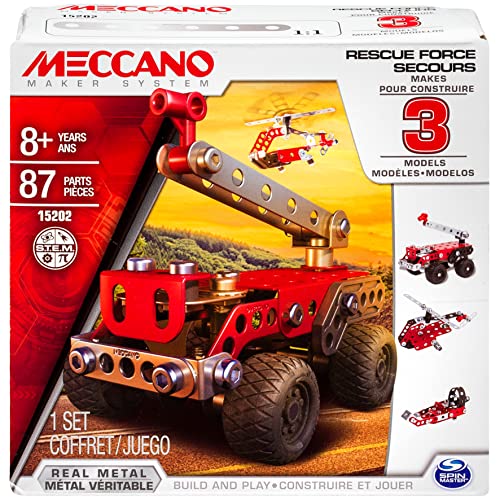 Being a rescue worker is one of the noblest professions out there. Risking your own life for the sake of others takes a special kind of determination. If you were not up to the task in real life, you can operate their machinery with this rescue squad set.

With 87 parts, 2 tools, and, most importantly, a set of instructions, you will be able to create three different types of vehicles.

So, you can just slide down that pole and hop right into your firetruck. Said truck also has an extendable ladder for all those high to reach places. You can also create a helicopter, to reach emergency situations quickly.

The wings of the helicopter are attached with a motor for realistic spinning. While some pieces might be a little small, it is an ideal setting for a young builder. 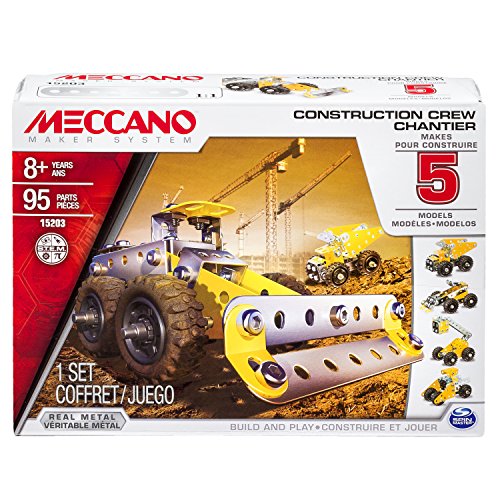 Now we move into the world of construction. If it weren’t for construction crews, we probably would not be sitting in our cozy homes.

You will be able to construct 5 different models from this truck building set. With a manual, a few tools, and 95 durable pieces, you can jump right into making a bulldozer. However, I would advise not to knock anything down using this particular machine.

Other models you can construct for construction purposes include a dump truck, which is meant to carry all of the raw materials such as sand and gravel. A cherry picker, or crane, which acts as a lift for workers. A front loader for carrying heavy objects over short distances. And finally, a roller, to even out any roads you might be laying down. 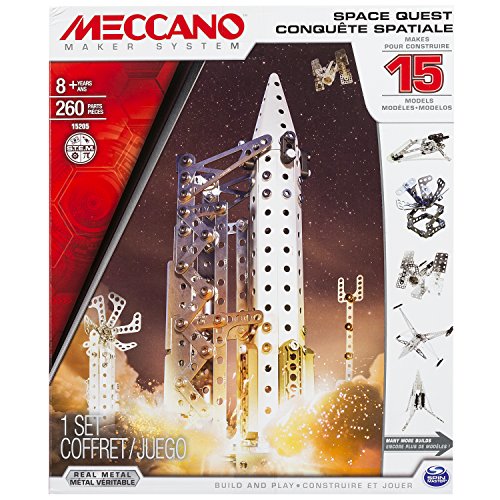 To outer space we go. The idea of planets other than ours is so fascinating, but the thought of being cooped up in an enclosed rocket exacerbates my claustrophobia. Also, what if I missed Earth and wanted to come back? I would have made a terrible astronaut. That is why I will make do with this space quest set, where I can create 15 models out of 260 parts.

Obviously, you will be able to make a rocket. It will not actually fly, so keep that in mind. Along with that, you will be able to create your very own satellite, which you can name after yourself. You can even make spacecrafts and lunar modules. Fulfill all space fantasies in the comfort of your living area. 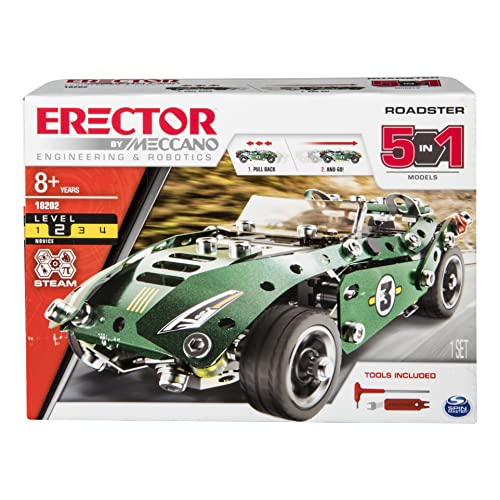 This is the kind of car you would take on a road trip to multiple cities. With the top down, you will feel the wind in your hair, warm sunshine on your skin, and the smell of the ocean by your side.

So, if you have a few hours to spare, this is an easy to build a model. In addition to the model shown on the box, you can also make four other styles with the 174 parts included in the package.

The purpose of these models being educational is to cultivate innovative thinking. If children can figure out new ways to use the given pieces, and build an out of the box figure, it means they are good at coming up with creative solutions. 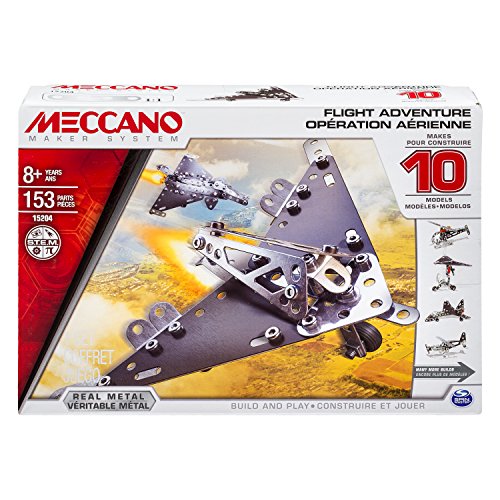 Have you ever played that shooter game on your PC or phone? Where you are the sole fighter jet and have to gun down all of the enemies. This set kind of reminds me of that.

While this flight adventure set will not actually shoot out lasers, you can create ten models from the 153 pieces, and pretend you are up against some vicious traitors.

You can create planes, wing jets, helicopters, drones, or anything with wings that you can come up with. They will not require any batteries, and you can create your base of operations with these models. Forewarning: Do not throw this in the air like a paper airplane. It will not fly, most probably break, and is likely to cause harm. 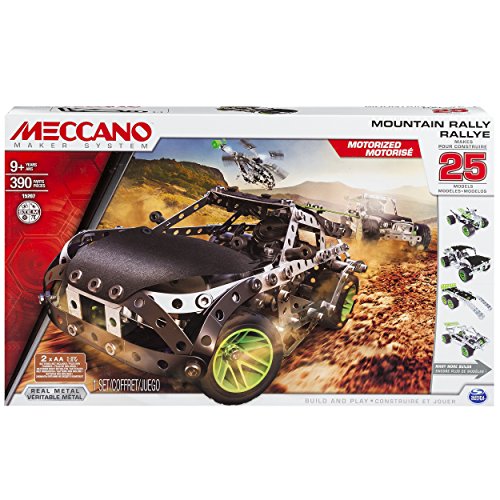 If you have ever wanted to participate in a racing game, where you go up a dirt path to reach the top of the mountain, this is the set for you. This rally vehicle is ideally designed to tread on rough terrain. With 390 parts, not only can you build an off-roading vehicle, but also 25 other contraptions.

These machines include ten different styles of rally vehicles, pick-up trucks, and even a helicopter that has been chasing you up the mountain.

A distinctive feature of this set is that it has an electrical motor powered by batteries. Not only will this vehicle look good after building but will also run smoothly over the mountains in your garden. You will leave your rally competitors eating dust. 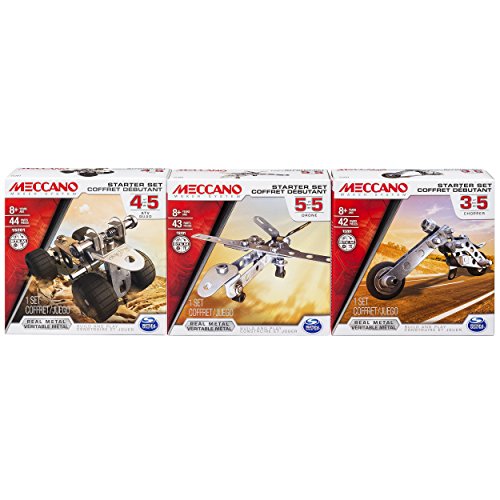 This set bundle is for the people who cannot decide on one model. If you want to go on a ride on a stable four-wheeler, the ATV will fulfill your needs. If you want to spy on your foes, the drone would be sufficient for that. If you want to cruise along the highway, the chopper will come in handy.

This is a very basic set, in a sense, all three vehicles will be plainly made. It has no frills in terms of design and functions. You can build all three models from the 129 parts as given in the instructions, or you can come up with your own creative hybrid. Adding drone wings on a chopper would not provide much functionality, but it can be an innovative idea.

Now that we have given our top picks for the building models, there are a few factors that you need to keep in mind before you purchase a set.

Material – The body of the vehicles, along with corks and screws, are all made of metal. This is not the cheap bendy kind of metal, but a sturdy one. You can have a guarantee that once you build a model, you can easily take it apart, and the pieces would still be in shape to retry some new designs.

Age Range – As I have mentioned before, there is no stopping even a 45-year old to build these models. It would also be fun for them. Generally, you should keep them away from toddlers, since the small pieces are a choking hazard. We all know how much kids like putting everything in their mouths.

An ideal age for a child to start learning to build would be 8. At that age, they will have the patience to make the model themselves. You might reason that a 5 or 6-year-old could also be capable of building a model. While that may be true, they might not appreciate the process of constructing a set themselves and would only want to play with the end product.

Supplementary parts – You might be wondering if you need to bust out your tool kit with your screwdrivers and a glue gun. You do not. The tools required will be provided inside the kit. Along with that, there will also be additional materials at times such as LED lights and motors. Do not try to glue the parts together, as you might want to deconstruct them and make a new model.

Are Meccano and Erector different companies?

At one point in history, they used to be different brands, but Meccano bought Erector in 2000. Now, both are sold by Meccano, with Erector by Meccano as a sub-brand.

If your child is above a toy-eating age, they can be left with their devices to figure out the set. However, you can help them identify different parts and how each part would fit together.

The number of parts given is sufficient to make one model at a time in most sets. You can try to make newer models that use fewer parts each, or you can disassemble the model you made for the next invention.

Can you buy separate pieces from the set if a few go missing?

You cannot individually buy pieces, only a complete set. Since parts are small, it would be best to carefully keep track of them.

Since the sets primarily target children that are eight or older, they are easily understandable. Kids can assemble and operate these models on their own.