LEGO kits and bundles are very fun and entertaining for both children and adults, but there’s a very special series that seems to appeal to those looking for a bit of a challenge. We are talking about the LEGO Technic series.

Basically, Technic kits are very ‘technical’ in nature (hence the name), and they usually feature thousands of pieces, intricate functionalities, and pretty complex modes of operation.

If you’re interested in finding the best LEGO Technic sets that money can buy, you should stick around and browse through our selection of the top 10 models. 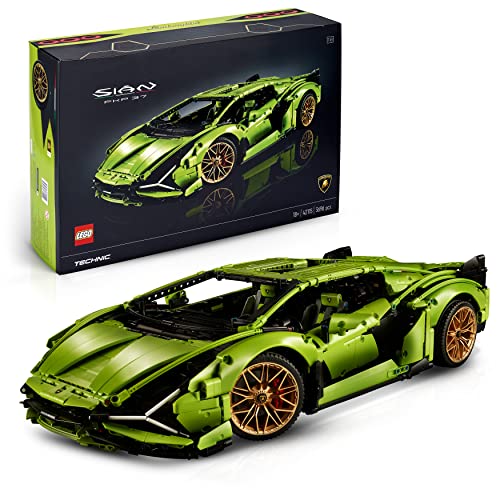 Let’s open up our review of the best LEGO Technic sets with the iconic Lamborghini Sian FKP37. In short, this might be the most unique, most beautiful LEGO set available on the market, although it does cost quite a bit. It’s not recommended for children as it sports 3696 pieces, and assembling it will be a long, but thrilling and rewarding journey.

The Lamborghini Sian FKP37 features both electronic hubs and an analogue 8-speed gearbox motor that provide it with more than enough strength to reach speeds that are practically unattainable for most toy cars.

Even though it’s pretty hard to put together, the Lamborghini Sian FKP37 bundle features an easy-to-read instructional manual that will guide you through the entire process. 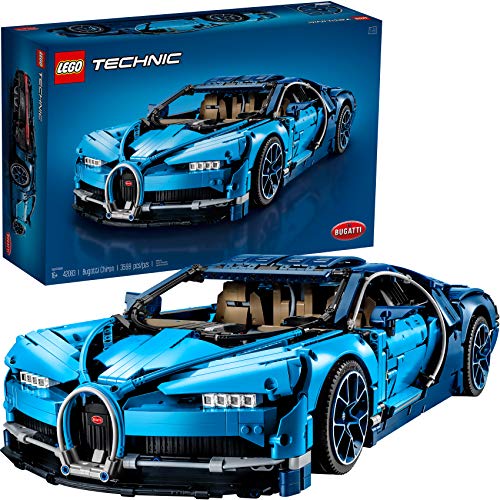 Next up we have LEGO Bugatti Chiron, which is another marvellous replica of the classy high-end vehicle most car enthusiasts hold in high favour. Just like our previous pick, the Chiron is not really recommended for children under the age of sixteen as it sports 3599 pieces, most of which are fairly tiny and easy to swallow.

The Bugatti Chiron is designed after the original Chiron, sporting as many authentic details as possible. It features a very detailed cockpit, as well as an 8-speed gearbox that can be operated with a special LEGO key (pre-assembled).

Most of Bugatti Chiron parts are highly interactive, and you can download the proprietary LEGO app to control it. 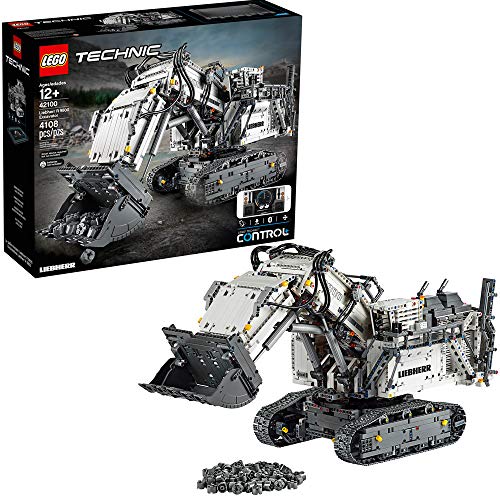 LEGO Liebherr R 9800 Excavator is currently one of the most complex and most expensive LEGO sets available for sale. Even though it sports 4108 building block and accessory pieces, it’s still decently easy to assemble and usable by children, teens, and adults over 12 years old.

This excavator model is powered by two LEGO Smart Hubs, but it also comes supplied with seven LEGO motors. Once assembled, its functionalities can be accessed and controlled via smart phone app.

The excavator rake and the caterpillar tracks are interactive, and you can simultaneously drive the Liebherr R 9800 Excavator and operate the crane. 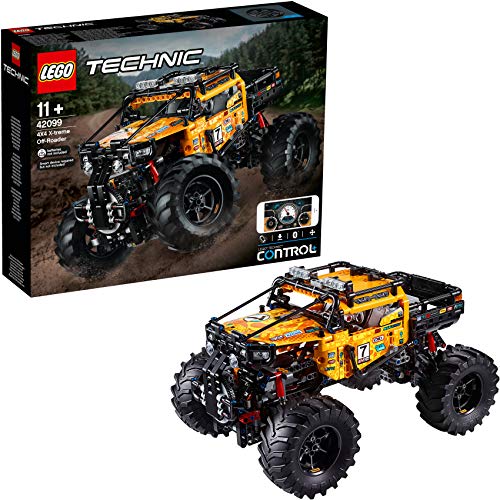 The 4X4 X-Treme off-roader sports three individual motors & a smart hub, all of which can be operated via Lego Technic Control Plus application that can be downloaded directly from the Lego™ store.

Furthermore, the only non-block elements of this LEGO set are the rugged tires, which are even sturdier and more durable than the blocks itself. The only potential downside to the 4X4 X-Treme off-roader is that it is pretty expensive, but it offers tremendous value for the buck. 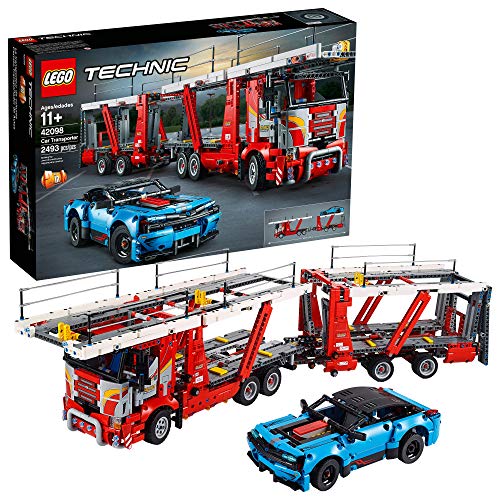 Next up is LEGO’s Car Transporter Technic kit. It’s quite pricey, but it is comprised of 2493 pieces and is recommended for children over 11 years old. This set features a two-part car transporter model packed with a V6 engine and a beautifully designed vehicle outfitted with a V8 piston-engine.

The first unique feature of the Car Transporter is the tilting driver’s cabin; once tilted, it will reveal the engine so you can replace it if it runs out of juices easily.

Furthermore, there are numerous exquisite features onboard the Car Transporter, including safety locks on the docking stations, safety rails, as well as decks that can be raised or lowered.

All of the building blocks that belong to this set are interchangeable, which means that you can use the parts meant for the carrier for the vehicle and vice versa. 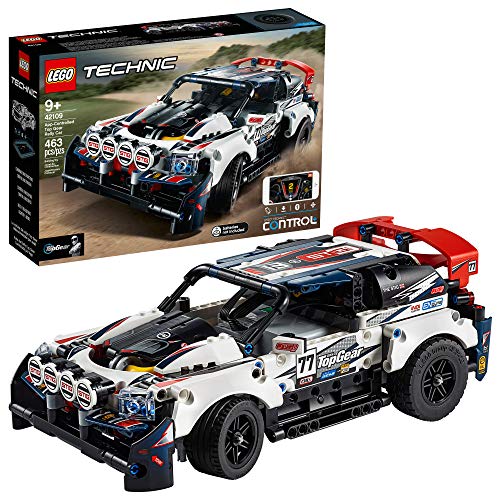 Here we have the LEGO App-controlled Top Gear Rally Car, which is one of the best high-end LEGO Technic sets available on the market. The set features 463 pieces and is recommended for kids over nine years old, adults, and teens.

Assembling the Top Gear Rally Car should be a breeze as there aren’t that many pieces, but what really makes it fun is that it can be operated via a smart phone app. The app will open up three screens with easy navigational controls, allowing you to steer, reverse, brake, accelerate, and even play various sound effects.

Another very cool feature of the Top Gear Rally Car is that the majority of its features pack very interesting graphic elements that not only aid the assembly process, but also add a nice touch in terms of the aesthetic elements to it. 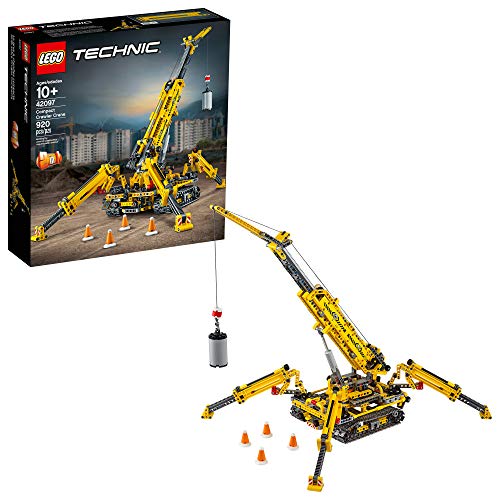 The Compact Crawler Crane is an excellent example of what LEGO Technic sets are all about. This is a complex-looking contraption that is fairly easy to assemble, it’s recommended for children above 10 years old, and it rocks 920 building block pieces, accessories, and props.

This is one of the best feature-packed LEGO packages, as it sports extendable outriggers, which can be moved laterally or vertically; furthermore, it features a flexible extendable boom, as well as a hoist supplied with versatile cabling & a safety lock.

Once assembled, the Crawler Crane is meant to sit in one position, from which you can operate its winch to lift the LEGO load accessory. There are also numerous pylons you can place around the crane to test out your accuracy.

What makes the Crawler Crane unique is the fact that its legs are extendable (and conversely, retractable), which means that it can reach up to 20 inches in height, or fold down to less than 10. 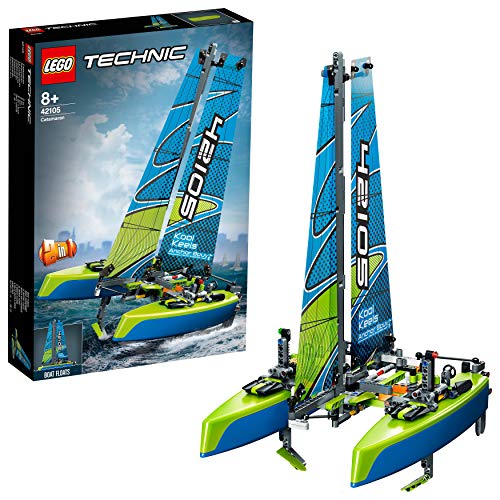 Catamaran is a classic mid-priced LEGO Technic set that is basically a replica of a multi-hull watercraft that both looks amazing and is pretty easy to assemble. It’s perfect for children and teens over 8, and it sports 404 building block pieces.

The Catamaran is much different from other Technic sets in the sense that it can actually float. It sports two sails, two dagger boards, as well as an authentic rudder.

What’s more the LEGO Catamaran is boasts a two-in-one design in the sense that it can be assembled in two slightly different ways (as an actual Catamaran and as a racer boat).

Even though it’s remarkably easy to put together, LEGO Catamaran comes with a handy instructional guide that was graphically illustrated so even the youngest of kids can easily understand it.

It’s just slightly more expensive than an average LEGO kit, but it is still fairly affordable. 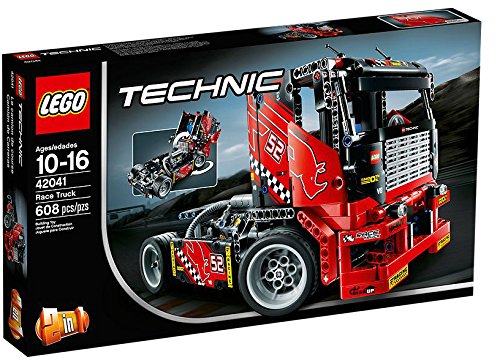 Next up is the LEGO Race Truck; this is a highly affordable LEGO Technic vehicle that is recommended for children over 7. It sports 227 pieces, which also include the assembly blocks for the ‘finish line’ pole.

Just like several other LEGO budget vehicles, the Race Truck rocks a huge array of beautiful graphics stamped onto some of its parts that the children can use as the foundation upon which they can build the rest of the vehicle.

One of the most amazing features that the Race Truck comes supplied with is the pull-back action; basically, by pulling this LEGO vehicle backwards, the system stores the kinetic energy gained from friction and utilizes is to slingshot the race truck forward.

The Finish Line is very simplistic and plain, but what makes it so great is that you can use it with other LEGO pieces and sets. The alternative building ‘style’ for the race truck is the ‘racer’, which requires the same materials and building blocks. It’s not necessarily much faster, but it has a largely different design and aesthetics. 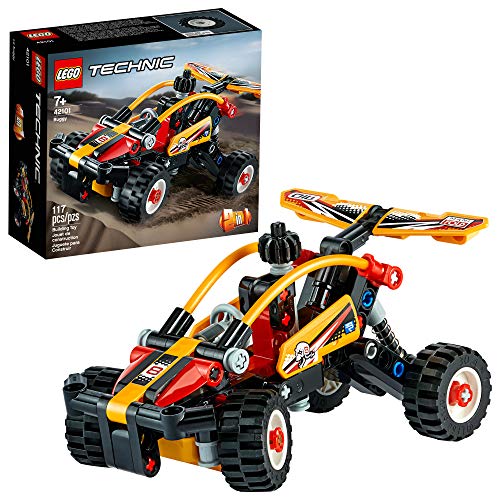 Our final pick is LEGO’s Buggy, which is also the simplest and the cheapest Technic set the brand has to offer. It is recommended for children over the age of seven and it sports only 117 construction pieces.

What makes this LEGO bundle so great for the buck apart from affordability is the fact that it’s incredibly easy to assemble, yet it’s still just as fun and functional as more expensive Bugatti and Lamborghini toy vehicle sets.

The Buggy is a very authentic replica of the famous dune racer; it sports a functional steering system, working suspension, as well as a set of rotatable tires. Furthermore, it rocks a two in one design, which means that it does not have a singular assembling scheme.

One of the main reasons why kids absolutely adore it is that it’s so easy to put together; most of its parts feature distinctive, unique pictures and graphics, so they’re easy to tell apart from the rest of the building blocks.

LEGO Technic bundles are special in almost every way, and there aren’t many threads that can be used to ‘line’ them together in terms of similarities.

The first thing most people notice about Technic sets is that they are substantially more expensive. Of course, exceptions exist, and a schoolbook one would be the ever-so-cheap Buggy model.

Keep a close eye on who the Technic set you had in mind is good for; certain models aren’t meant for kids under 16, others are exclusively for adults, but a good portion of them can be assembled by children under 10 years old.

One of the things that separate non-Technic and Technic sets are the functionalities. Namely, some LEGO sets are interactive, but LEGO Technic sets also feature app-powered controls, customizable features, and such. It’s always smart to keep this in mind, especially if you are looking for toys you (or your kid) can play with rather than just enjoying construction.

Speaking of construction, LEGO Technic bundles and kits in certain cases come supplied with thousands of small pieces. These particular models are generally pretty hard to assemble, but luckily, all LEGO sets come with an instructional manual (or a guide) that can help you immensely with this problem.

Additionally, a good portion of LEGO Technic kits can be considered as educational, as they impose basic engineering knowledge and skills upon children, teens, and adults that ‘dare’ begin constructing them.

Durability-wise, LEGO Technic sets are built from the same material as a non-Technic kit, which means that they are as sturdy as it can possibly get.

What is a LEGO Technic set?

LEGO Technic refers to a special ‘theme’ of LEGO blocks that is a bit more technical in nature. They typically feature thousands of pieces that need to be put in a correct spot and order if the end result is to be ‘functional’.

They also normally come supplied with various battery and electricity-powered features, such as motors or hubs.

Top LEGO Technic sets are several times more expensive than top LEGO casual sets (Batman kits, City, Classic, Creator, and such), but there are also models that are available under $50 (such as the Buggy, for instance).

Are LEGO Technic blocks usable with other LEGO blocks?

Yes, LEGO Technic building blocks feature the same connectors and are made from the same material. The only parts that are not interchangeable are ‘custom’ parts (such as the ‘fork’ of a lifter crane or tires of Bugatti and Lamborghini).